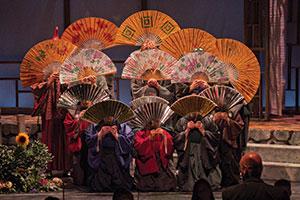 “When ‘H.M.S. Pinafore’ first premiered in the U.S. in 1878, it was like Beatlemania,” said Brian Goodman, general manager of the Young Victorian (Young Vic) Theatre Company in Baltimore.

The fourth collaborative musical project of librettist William Schwenk Gilbert and composer Arthur Seymour Sullivan, “H.M.S. Pinafore” is considered a forerunner of the Broadway musical, added Goodman. The perennially popular operetta will be performed by the Young Vic at its new venue, the Sinex Auditorium at Roland Park Country School, on July 13, 14, 18, 20 and 21.

The Young Vic (originally known as the Gilman Summer Theater) was founded in the summer of 1971 by a group of Gilman students who fell in love with the operettas of Gilbert & Sullivan after they performed “The Mikado” in a high school production.

Goodman, who attended Johns Hopkins University after graduating from Gilman, was asked to take over as general manager of the company in 1977. A Pikesville resident, Goodman has served in that role for the past 37 years.

“When I was hired, my first act as general manager was changing the name to the Young Victorian Theatre,” said Goodman, who has kept his day job as a partner in the law firm of Pessin Katz, PA.

By changing the company’s name, Goodman hoped to communicate to audiences, reviewers and media that the theater was becoming increasingly professional.

And in a town with a vibrant theater scene, the Young Vic had a niche. It performed only summer productions and performed only the works of Gilbert & Sullivan. 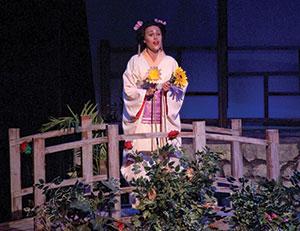 That’s one reason why mezzo-soprano Jenni Bank, 28, will return for the fourth summer in a row to play Little Buttercup in this season’s production of “H.M.S. Pinafore.”
“It’s fun to sing Buttercup with a grownup voice,” said Bank, who first played the role in her mid-teens.

Previously, Bank performed the role of Ruth in “The Pirates of Penzance” and twice played Katisha in “The Mikado” in Young Vic performances. Born to a Jewish family in South Africa, Bank grew up attending the Hillel Academy of Broome County in Binghamton, N.Y., and studied at the Peabody Conservatory in Baltimore, which she called, “my second home.”

“My family was big on holidays and big on the Jewish tradition of music,” Bank said. “Our Passover seders are just one long musical.”

Nowadays, the Young Vic has an operating budget of $175,000. Like Bank, the other lead performers and orchestra members are all professional musicians.

And while the librettos may be from the 19th century, Gilbert & Sullivan never grow stale.

“It’s traditional with Gilbert & Sullivan to update the songs,” explained Bank. “I know there will be ‘Baltimorisms’ and political references incorporated into the show.” 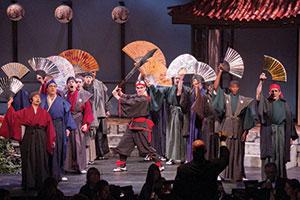 Since its founding, the Young Vic Theatre has always been based in the Roland Park area, first at Gilman School and then at The Bryn Mawr School. This year the company will stay in the neighborhood, but performances will take place at Roland Park Country School.

Audiences can rest assured that they won’t miss any of the libretto since all Young Vic productions now include surtitles.

“We are the longest-tenured summer theater in Baltimore, and we’ve got the finest talent in town,” Goodman said.

For additional information and to purchase tickets, visit yvtc.org.